Comparing the Most Popular Screenplay Programs

When we first launched Gorilla 15 yrs ago, there were really only two choices for screenwriting software: Final Draft and Movie Magic Screenwriter. Since then, the landscape has changed and many more tools have come along. Today I’d like to share with you our take on The Most Popular Screenplay Programs. If you are thinking of going into production using Gorilla Scheduling or any other Scheduling package, take note of the Production Friendly Rating that we give each package.

Without a doubt, Final Draft is the industry standard and has been for many years. It has everything you need in terms of features when writing a feature-length screenplay using industry standards.

Final Draft uses Elements formatting, such as SLUG LINE, ACTION, CHARACTER, DIALOGUE, & TRANSITION, to automatically format your words into Hollywood’s strict screenplay standards, including font, margins and abbreviations. Why is the Courier Font the screenplay standard? It’s because it was designed by Howard Kettler in 1955 and IBM used it as their standard for years. Final Draft even came up with their own “Final Draft Courier” font.

Final Draft also came up with the Return/Tab system. What this means is that the software can anticipate what element you are going to type next depending on whether you hit Return or Tab. For example, if you’re writing a scene header or slug line, when you hit Return, Final Draft automatically formats the next line as an action element because that’s the most common element that follows a slug line. Similarly, after typing a Character when hitting return, you are most likely going to be writing Dialogue for that Character.

Tagger, a separate program that comes with Final Draft, can be used to tag your screenplay before you import it into a Scheduling program. Final Draft also has a mobile companion for iOS.

Movie Magic Screenwriter automatically formats your script to industry standards and is officially endorsed by the Writers Guild of America East.

Movie Magic Screenwriter can import scripts saved as Microsoft Word documents, PDFs and rich text documents without requiring too many fixes to get the formatting right. The latest version supports Final Draft documents, which screenwriters frequently work with.

Celtx is a good choice for beginners and students. The program provides automatic formatting as you write and saves your characters. For more complex direction, the menu includes tutorials that guide you through writing your scenes.

If you are ok with Online Scriptwriting and will not be submitting your screenplay to Hollywood, you might want to consider Celtx. However, trying to integrate with other programs is where Celtx falls short.

Production Friendly Rating: 3 (unless you opt to stay in the Celtx-world).

Fade In is powerful, straightforward screenwriting software that includes all the useful features screenwriters need while excluding superfluous tools. The result is a modern, intuitive and professional script-writing program. One major difference between Fade In and other screenwriting applications is that Fade In saves the screenplays you create as Fountain files, rather than in a proprietary file format. This means that Fountain files are plain text files that you can open and edit with any text editor. This seemingly simple feature changes nearly everything. It means that you don’t have to have Fade In installed on a computer to edit your Fade In screenplays. It also means that you can import files you create in Fade In into any screenwriting software with no problems. All the elements and formatting remain intact no matter where you take the file.

Montage is screenwriting software by Mariner Software. It has all the tools and features you need to write a screenplay from fade-in to the credits. However, many have found the software to be a bit awkward to use. Probably the best feature in Montage is its full-screen mode. This allows you to eschew all the distractions dancing around the words on the page and focus on what you’re writing. Most writers will tell you that the best writing happens during rewrites. This is where Montage really falls short for screenwriting. There are no features that enable you to track changes, lock pages or create shooting scripts. In fact, the only production element in Montage is the ability to add scene numbers to the screenplay. Eventually you would have to invest in full-featured screenwriting software if the screenplay you write with Montage ever goes into production. Montage can export to the .fdx file format.

The Other (and the rest…)

Others: Some other software titles we didn’t include in this comparison are Adobe Story, Scrivener, Storyist, and Slugline. Unfortunately we’ve found that most of these lack the features and tools required for professional screenwriting, but more importantly for this comparison, were not production friendly.

The conclusion? It’s the same as it was 15 years ago.

If you are thinking of using a screenplay program for either a Hollywood submission or a film production, your best bet is still to use Final Draft or Movie Magic Screenwriter. Again, it’s just our opinion, but being in the Scheduling and Budgeting world all these years, we’ve seen these two programs used most of the time, and for good reason. Until next time… Happy Writing and Filmmaking!

Interested in a great tool to help outline our story? Check out StoryO for iOS 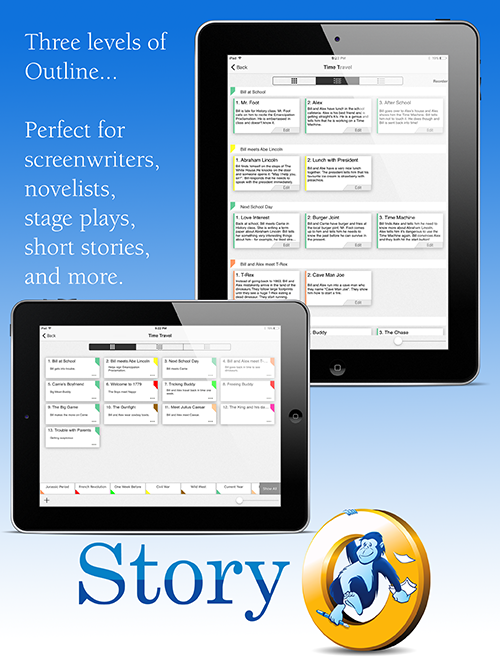 StoryO for iOS: Available on the App Store

Take a Peek at Scheduling

Watch a short video and learn how easy it is to get started with Gorilla Scheduling.

Take a Peek at Budgeting

Watch a short video and learn how easy it is to get started with Gorilla Budgeting.

Get started right away!

Subscribe to our newsletter to receive special offers, tips & tricks & other helpful info! Note: Your information will NOT be shared with others.